An American official realizes that his young son may literally be the Devil incarnate. 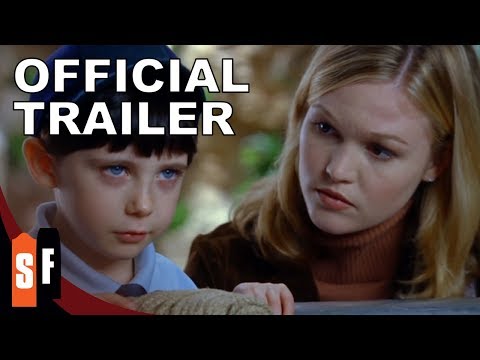 Instruktør: John MooreManuskript: David SeltzerMedvirkende: Liev Schreiber, Julia Stiles, Seamus Davey-FitzpatrickResumé: When the Vatican observatory Priest sees the appearance of a comet, the Church is sure that it confirms the eve of the Armageddon. Meanwhile, the U.S. President's godson Robert Thorn (Liev Schreiber) is informed in the maternity ward in Rome by Father Spiletto (Giovanni Lombardo Radice) that his wife Katherine (Julia Stiles) has just lost her baby and she had troubles with her uterus and would not have another pregnancy. Spiletto suggests to Robert that another just-born child that lost his mother could be the substituted for his son, and Robert accepts the child and gives him the name of "Damien". Robert is promoted to ambassador in London after a tragic accident. When Damien's nanny (Amy Huck) commits suicide during his birthday party, a substitute, Mrs. Baylock (Mia Farrow), comes to work and live with the family. Through the years, Katherine realizes that Damien is evil, while Robert is contacted by Father Brennan (Pete Postlethwaite), who tells him that Damien is the son of devil. When the Priest dies in a bizarre accident, photographer Keith Jennings (David Thewlis) shows evidence to Robert that the boy is the Antichrist. They travel to the town of Megiddo to learn how the boy can be stopped. —Claudio Carvalho, Rio de Janeiro, Brazil