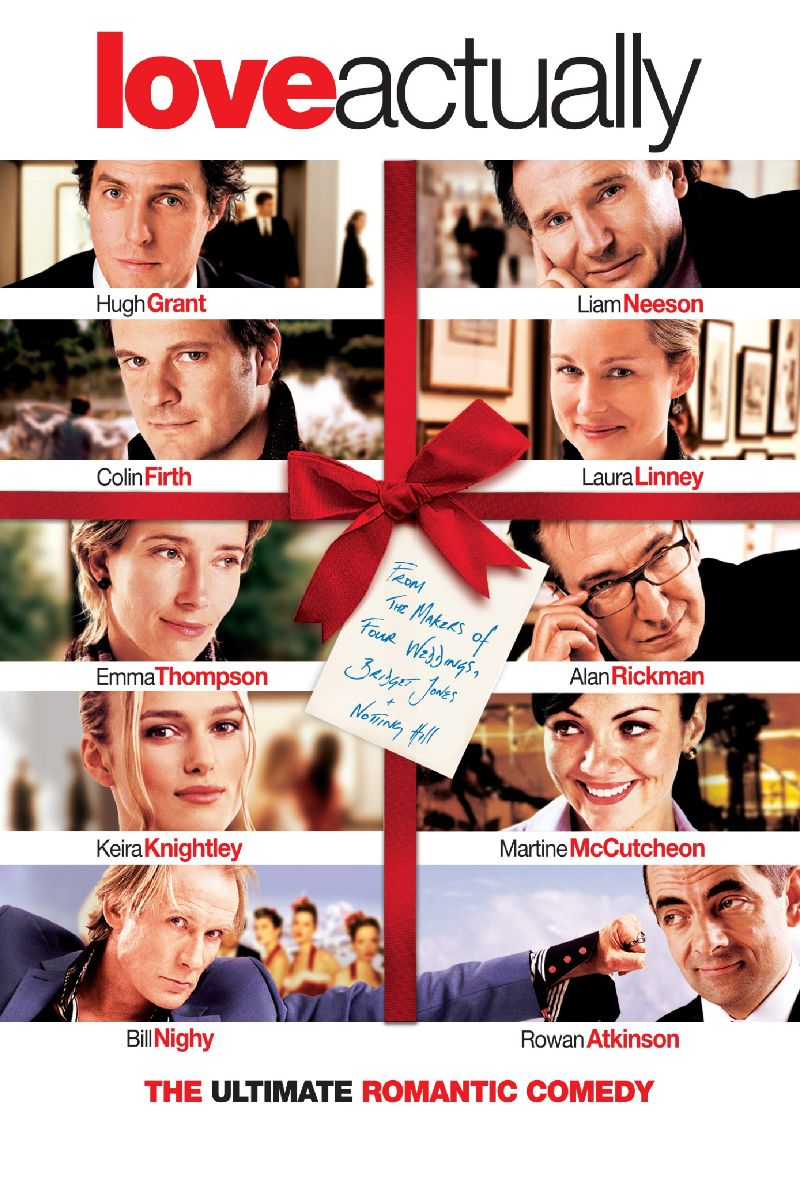 Instruktør: Richard CurtisManuskript: Richard CurtisMedvirkende: Hugh Grant, Martine McCutcheon, Liam NeesonResumé: Against the backdrop of aged has-been rock star Billy Mack's (Bill Nighy's) Christmas themed comeback cover of "Love Is All Around", which he knows is crap and makes no bones about it, much to his manager Joe's (Gregor Fisher's) chagrin as he promotes the record, several interrelated stories about romantic love and the obstacles to happiness through love for Londoners are presented in the five weeks preceding Christmas. Daniel's (Liam Neeson's) wife has just died, leaving him to take care of his adolescent stepson Sam (Thomas Brodie-Sangster) by himself. Daniel is uncertain how to deal with Sam and his problems without his wife present, especially in light of a potential budding romance within their household. Juliet (Keira Knightley) and Peter (Chiwetel Ejiofor) have just gotten married. They believe that Peter's best friend and best man Mark (Andrew Lincoln) hates Juliet, but won't say so to his or her face. Others looking at the situation from the outside believe Mark is jealous of Juliet, as he is in love with Peter. Jamie (Colin Firth), a writer, is taking a writing retreat by himself in rural France following catching his latest girlfriend (Sienna Guillory) in an indiscretion. Jamie ends up spending much time in France with Aurelia (Lúcia Moniz), the Portuguese woman hired as the housekeeper. The question becomes not only if they can communicate their day-to-day needs with each other as she speaks no English, he speaks no Portuguese, and neither speaks French very well, but communicate what seems to be their increasing mutual attraction to each other. Sarah (Laura Linney) has been in love with her co-worker Karl (Rodrigo Santoro) for the two years they have worked together, this attraction about which everyone in their workplace knows. Sarah has to decide if she can be forward enough to express this love directly to Karl, especially in light of what has been her personal priority of dealing with a family issue. Harry (Alan Rickman) and Karen (Dame Emma Thompson) have been in a stable long term marriage. His new assistant Mia (Heike Makatsch) drops hints to him that she would like them to be romantically involved. Harry has to decide whether to fall to the temptation, especially considering being married to a perceptive wife. Single and relatively young David (Hugh Grant) is the newly elected Prime Minister. At 10 Downing Street, he is attracted to one of the new household servants, Natalie (Martine McCutcheon), but isn't sure what to do about it seeing as to their respective positions, the probable public scrutiny, and an incident involving the visiting U.S. President (Billy Bob Thornton). Socially unaware Colin Frissell (Kris Marshall) believes that the lack of romantic love in his life is all the fault of standoffish British women. As such, he decides to take decisive albeit somewhat unusual geographic action. And John (Martin Freeman) and Judy (Joanna Page) are movie body doubles. They can communicate with each other straightforwardly while they are simulating sex filming a movie, but they may not be able to translate the feelings behind that simulation in real-life to each other. —Huggo