Directed by Robert Rodriguez and by Oscar-winner Patrick Osborne the special will also include animated elements, taking viewers on a dreamlike journey through Billie’s hometown of Los Angeles and its most iconic backdrops. “Happier than Ever: A Love Letter to Los Angeles” features FINNEAS, the Los Angeles Children’s Chorus, the Los Angeles Philharmonic conducted by Music & Artistic Director Gustavo Dudamel, and world renowned Brazilian guitarist, Romero Lubambo, with Orchestra Arrangements by David Campbell. “Happier than Ever: A Love Letter to Los Angeles” was produced by Interscope Films and Darkroom Productions, in association with Nexus Studios and Aron Levine Productions, with Kerry Asmussen as the Live Concert Director and Pablo Berron as Director of Photography.

“Disney is incredibly iconic, so to collaborate on something like this is a huge honor,” said artist Billie Eilish. “To be able to present my album in this way and dedicate it to the city that I love and grew up in is so exciting to me. I hope you love it.”

“We are all huge admirers of Billie and Finneas here in our household. They are such impressive, world class talents that it’s a real honor to work with them on this film, said Robert Rodriguez, director of ‘Happier Than Ever: A Love Letter to Los Angeles.'” “The way the narrative story and animated pieces weave through her incredible concert performance, makes this a spectacular event that is truly unique.”

“Billie has captivated fans around the world with her soulful voice and raw, honest lyrics, and we are proud to bring this incredibly cinematic and unique concert experience to Disney+,” said Michael Paull, president Disney+ and ESPN+.

Gary Marsh, president and chief creative officer, Disney Branded Television said: “Billie’s musical evolution, coupled with her singular vision in crafting this special, establishes her as one of this generation’s premiere artists and storytellers. She delivers a concert experience like no other!”

As seven time GRAMMY® Award-winning artist Billie Eilish prepares for the July 30th, 2021 release of her highly anticipated sophomore album “Happier Than Ever,” the 19-year-old Los Angeles native remains one of the biggest stars to emerge in the 21st century. Eilish’s breakout album, “WHEN WE ALL FALL ASLEEP, WHERE DO WE GO?” debuted at No. 1 on the Billboard 200 in the U.S as well as 17 additional countries around the world upon release in 2019, and was the most streamed album of that year. She later went on to make history that year as the youngest artist to receive nominations and wins in all the major categories at the 62nd GRAMMY® Awards. Most recently, she took home both Record of the Year for “everything i wanted,” and Best Song Written For Visual Media for “No Time To Die” at this year’s 63rd Annual GRAMMY® Awards. Eilish’s forthcoming album ‘Happier Than Ever’ was written by Billie and her brother FINNEAS, who also produced the album. 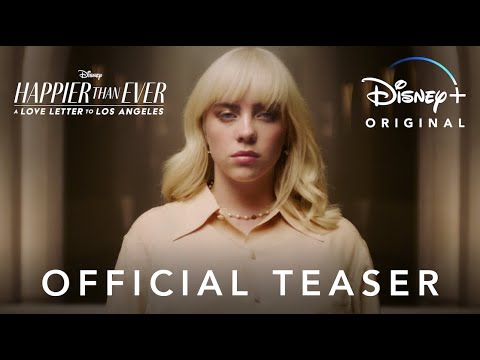 Happier Than Ever: A Love Letter to Los Angeles | Official Teaser | Disney+

Billie Eilish: Happier than Ever: A Love Letter to Los Angeles Disney+ STREAM HER
Musik